How the production of AAC is becoming even more sustainable

Our recyclable construction and insulation materials promote the energy efficiency of buildings and contribute to environmental and climate protection. Nevertheless, we need natural resources for production and cause CO2 emissions. That’s why we are constantly working to improve the carbon footprint of our products. For example, our goal is to increase the recycling rate for autoclaved aerated concrete (AAC) to 20 percent of the annually generated AAC construction- and demolition-waste in Germany by 2030. According to current forecasts, this corresponds to an annual volume of around 200,000 metric tons. We talked to Dr. Oliver Kreft from Xella Technologie- und Forschungsgesellschaft mbH about the state of play and what current research results and projects there are.

The recycling rate of AAC is to increase to 20 percent by 2030. Why is that so significant?

Sustainability is one of the central future issues in our industry. Above all, the issue of CO₂ emissions represents a major challenge. At the same time, the construction industry is responsible for around 50 percent of all raw material extraction and over 35 percent of all waste generated in the EU. An ecologically sustainable built environment requires that - in addition to considering CO₂ balances – the principles of the circular economy must apply throughout the entire life cycle of buildings. This can be done, for example, by ensuring that building components are fully recycled and reused to produce new building materials.

What does circular economy mean in relation to autoclaved aerated concrete?

We are working on establishing circular economy for autoclaved aerated concrete. This means that we want every building to serve as a raw material store for the buildings of tomorrow. We want to ensure its high-quality continued use after demolition or dismantling.

What is already possible today?

Already today, 80 percent of the mineral building demolition material produced each year is reused in Germany. That’s a good figure, but much of it goes into road construction and is taken out of the cycle. In the future, autoclaved aerated concrete should be reused as indefinitely as possible in its original or at least equivalent function. To achieve this, it is necessary to create customized technologies and structures. 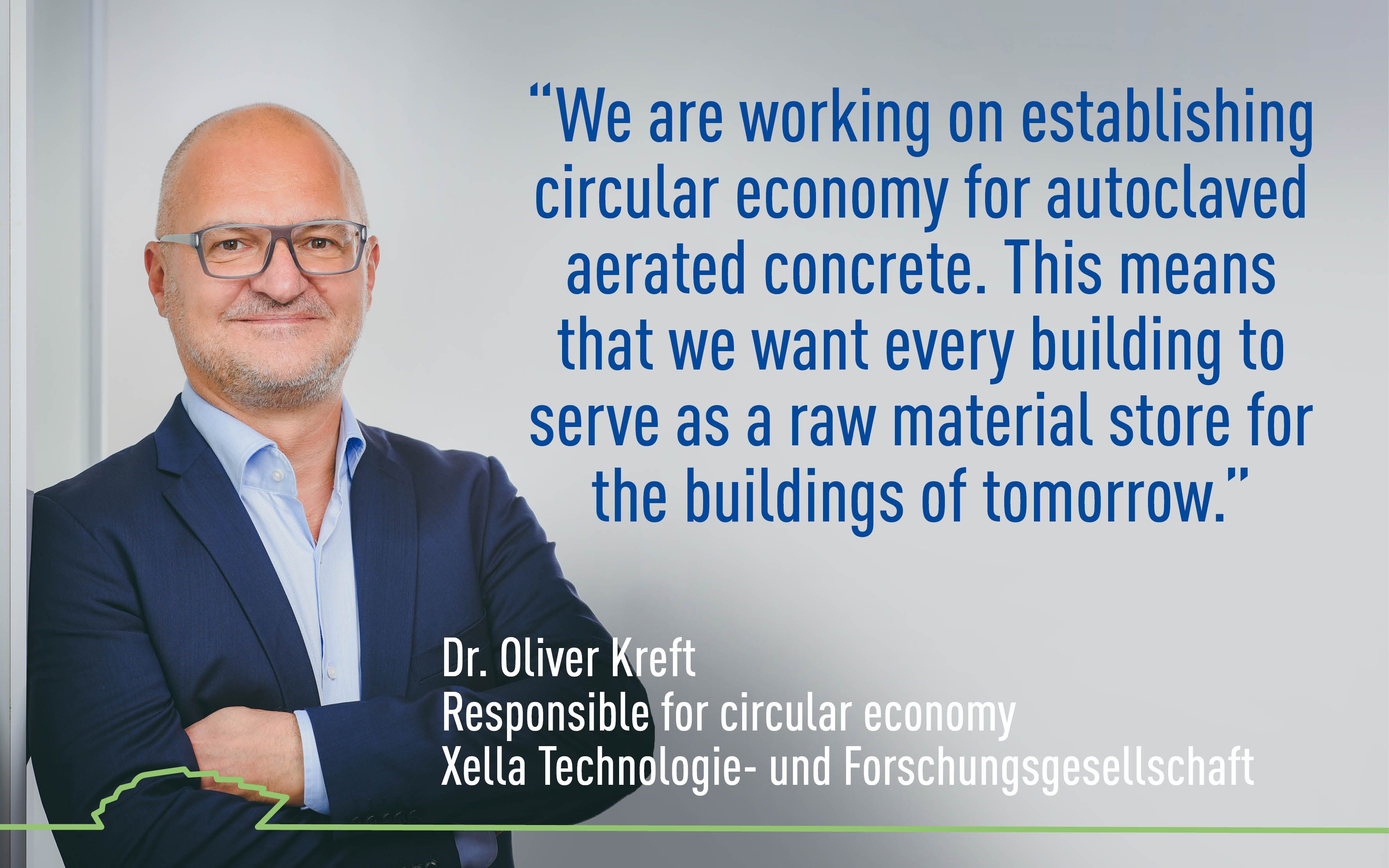 What are currently the most promising projects? What are you currently working on?

Our autoclaved aerated concrete products are already suitable for circular use. We at Xella are committed to further expanding the circular economy. Our activities in this regard are going in three directions:
First, adapting the formulations of our products without compromising on quality; second, we are pushing product innovations; and third, we are focusing on open innovation projects.
Many projects are currently in the pilot phase. We are looking for partners, must get material flows going to make post-demolition AAC available and establish new processing routes. The technical challenges are often comparatively simple to solve.

Can you give an example to illustrate this?

We are working on a “granulated block” that consists largely of post-demolition AAC. This will later be used to produce cat litter, among other things. For such a product, we naturally need suitable starting material. We therefore need to identify processors who can provide us with the necessary material in the quantities we need.

So it's also a question of making more scrap material available?

Yes. Production and scrap cuttings from our own production are a valuable material that is shredded and immediately returned to production – we have been doing this for decades. However, with the Ytong Big Bag system established in some countries, which we have been using since 2015 to return AAC scraps from new construction to the Xella plants, we are tapping into just 5 percent of the recyclable material generated on construction sites in Germany. I still see huge potential there.

Xella is also cooperating with the Karlsruhe Institute of Technology (KIT) in the development of a new type of binder from waste-AAC by the so-called “Resynergy” process, which was invented there.

Right. The carbon footprint of autoclaved aerated concrete is largely shaped by CO2 emissions generated during the production of lime and cement. That's where we come in. The research project is investigating whether a cement substitute can be generated from demolition material - for example waste-AAC. And this is being done by a process being less CO2-intensive than the conventional cement production.

In your view, what are currently the most promising projects for greater sustainability?

I’m already expecting a lot from the previously mentioned projects: the exploitation of old material, the adaptation of formulations, the development of new products in the granules sector, and new types of binders. At the same time, we are working on further improving the carbon footprint in production by researching substitutes for the major CO2 drivers lime and cement.

At the same time, there are exciting approaches to Carbon Capture and Utilization (CCU), Carbon Capture and Storage (CCS) or new methods for decarbonizing high-temperature processes. CCU means CO₂ capture and utilization, i.e. the separation of CO₂ exhaust gases and their subsequent use as a raw material - for example in the chemical industry. CCS technologies, on the other hand, aim to permanently store the captured CO₂ in underground reservoirs. But it is still too early to predict which of the technologies will bring us the breakthrough this decade.